Wynnic is the name for the language featured many times throughout the game, as well as in logos and teasers around the game. The language uses a rune-like alphabet, a transcriber of which can be found by completing the Wynn Plains Monument discovery. It was first introduced without any transcription or character list, resulting in a large collaborative effort by the community to "solve" the language.

The player is given an Ancient Wynnic Transcriber after having seen the Wynn Plains Monument discovery, which can be used to translate the very few pieces of Wynnic found during a normal playthrough. 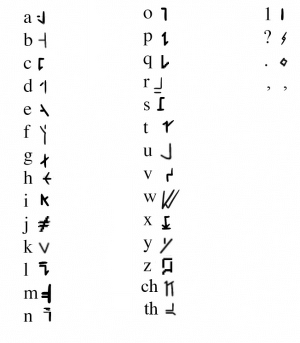 This was the known Wynnic alphabet as of August 14, 2015, which is still valid as of July 7, 2019, seeing as no changes or additions have been introduced. It is commonly assumed by the community that there will be / are symbols representing the sounds SH and AE, as the sounds CH and TH already have their own characters which can be found in e.

The official characters from the Wynncraft resource pack, the WynnPack, can be found below. It is worth noting that it does not include the combined characters, nor any punctuation.