The Void is a vast, dark region beneath the world of Wynncraft. The primary place it can naturally be entered is below the shattered Sky Islands, in Gavel. The Void is first unlocked and explored during the quest One Thousand Meters Under, at level 95; however, it may also be visited briefly during Recipe For Disaster, and there are minor connections to the Void in some other locations, like the Silent Expanse.

The Void consists of a sea of rocky islands, suspended in an endless grey sky. The native creatures of the Void are dark and hostile monsters; any living things from the surface world that linger too long in the area are eventually warped by its alien physics and atmosphere. The strange properties of this place, however, also create many kinds of unique and valuable resources.

After completing One Thousand Meters Under, the main area of the Void (beneath the Sky Islands) can be accessed again by using the Void elevators in Ahmsord. Navigating the Void generally involves parkouring across precarious bridges of broken rocks, or otherwise by using Void Storms or other mechanisms which can launch you through the area and between islands. Falling off the islands anywhere in the Void will usually result in death, and if any items are dropped into the Void, they will become irretrievable.

Although it can't be said how long the Void has existed, or where the original creatures that inhabit it came from, the history of its connection to Gavel begins 1000 years ago (at around the same time the Nether Gate was opened in Wynn). When the mysterious "cataclysm" rocked the Ahms region and created the Sky Islands (as related in The Fortuneteller), many of the newly-formed islands fell into the depths of the Void.

Although the Void's atmosphere is quite toxic, and immersion in it apparently causes great strain on a normal body, some of the Villagers and animals that survived the fall were warped by it and adapted to living there, where they have remained ever since, "nurtured" by it. They have also built a small Void Village, with alien, Void-warped livestock and a merchant selling rare weapons.

Some other surface creatures also live in the Void; most notably, a nest of seemingly completely normal Fallen Wybels can be found just outside the village, far below their native Wybel Island.

The main area of the Void unlocked and visited during One Thousand Meters Under is split into a northern and a southern half. The northern half is a fairly linear chain, leading from the crashed Void submarine in the northwest, through the Void Village and the surrounding area, and finally to an elevator that can bring you back up to Ahmsord.

The southern half of the area can only be accessed after completing the quest. Using the Void elevators in Ahmsord will bring you to a small island in between the Void Village and the southern area, which consists of a larger, more complex field of interconnected islands. In addition to several Loot Chests and high-level mobs, this region contains several points of interest: firstly, it is the only location where Voidstone can be mined, at Mining level 100. The safest, and most lucrative, of these Voidstone mines is the one found on the large far-western island, which contains no mobs and 15 nodes of Voidstone ore. However, it is a very long way from the nearest Bank and Crafting Stations, in Ahmsord.

Additionally, the southernmost island of the area is the lair of the Void Spirula, the only natural source of the rare Black Hole Crafting Ingredient.

If you choose to cook Brie's Hearty Zork Stew Recipe during Recipe For Disaster, you will have to travel to a small island in the Void separated from the main island chain, using an elevator at the southern edge of the Sky Islands operated by a Villager named Crank. Although this island is shrouded in fog, limiting visibility, it is rather small and completely safe. The only notably feature is the Voidroot plant you are looking for.

In the Silent Expanse, A Journey Further, Otherworldly Occurrence, Space Between Realities, and the Path to Darkness all involve connections to the Void as well. 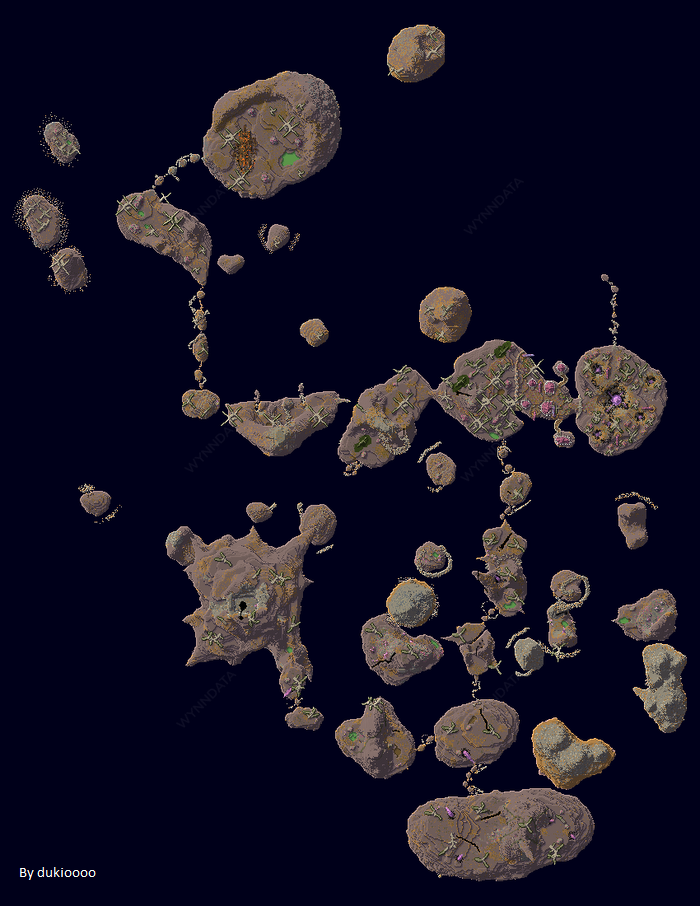