The Olm are a nearly extinct group hailing from an unknown land. Many hundreds of years ago they were the dominant group in the Wynn region, and had built a great civilization there. They used a theocracy, which was led by their high priestess. The Olm took an interest in Meteors, and built at least one observatory to track their fall in their domain. Additionally, the Olm were had access to both Runic and Time magic, which were likely related in some way. 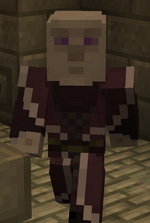 Olm mage in The Final Moments 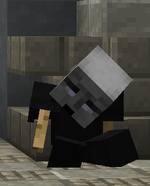 The Olm built a lot in their time, and much of what they created still stands to this day in the form of large ruins.

Note: The Olm's history is rather incomplete and has been not put into a timeline!

It is unknown where the Olm originated from. However, it is known that at one point in the distant past, the Olm created a civilization in the Silent Expanse, where they built the Ruined Olmic City, their capital,[8] as well as the Eldritch Outlook, for reasons unknown. For a civilization that flourished numerous millenia ago, they were very advanced, having harnessed powerful and obscure magic such as time magic and rune magic.

When meteors started falling onto Wynn and Gavel, the Silent Expanse's mountain range was specifically a hotspot for these meteors, as it was being bombarded almost constantly for years. The Olm noticed this and built at least one observatory to track the fall of the meteors.[3] At one point, due the constant bombardment of the mountain range, the Crystals were formed close to the modern-day tunnel to the Silent Expanse, where the "A Wynnic Excavation" discovery takes place. The Olm discovered these crystals and took them.

At some point during the meteor bombardment, a swarm of fireballs rained down onto the Olmic City. They were invaded by the Dern Beast. It conquered the Silent Expanse and forced the Olm to its domain, leaving the few remaining Olm to flee.[3]

However, the Olm were able to use the power of the Crystals to escape Dern, returning to our plane of existence. They then fled to the Dernel Jungle (it is uncertain whether they made contact with the ancient jungle tribesmen or not) and founded the Ancient City. As time progressed, the Olm slowly descended into insanity due to the overwhelming power of the Crystals and due to them believing that the Dernic Beast was still observing them from afar, trying to call them back to its realm. Some even fell to the Corruption. Some Olm decided that they should return the Crystals back to where they found them and hide them there, however it's unknown whether they were actually able to accomplish this.[9]

The remaining Olm, those who fled from the Silent Expanse in the initial attack and weren't taken to Dern, fled into the Wynn Plains and built the Time Valley, as well as the Temple of Time. This, however, failed and they were found by the Dern Beast, time itself being ripped asunder in this valley due to the effects of the Olm's time magic.[4] Even today, time acts far more strangely in the Time Valley than it does in any other place.[10] The timeline and the valley itself are protected by Old Man Martyn.

Each place is separated by a blank line, each sign is on its own line.

Images of signs in the secret rooms in Ancient City