The Eye, "Overseer of Wynn," is a mysterious entity of Dernic origin with great symbolic importance throughout the Province of Wynn and beyond. Throughout the history of Wynncraft, the Eye's importance has been hinted at and foreshadowed, most prominently in the WynnExcavation series of Quests (as well as appearing in the Wynncraft logo itself); but like much of the information around Dern, it remained shrouded in obscurity. The Eye was finally revealed in-game for the first time in the 1.19 Reveal Trailer, in October 2019.

The Eye appears as the final boss at the pinnacle of the Eldritch Outlook. After crossing the Silent Expanse and reaching the dungeon at the end of the level 101 quest A Journey Further, players must defeat the Eye at least once to unlock the endgame content of the region around the Portal to Dern, including A Hunter's Calling and the final Secret Discovery in the Silent Expanse. With 3.5 million health and an unprecedented host of mechanics and abilities, the Eye is designed to be challenged with a large party, and is currently one of the most difficult bosses in the game.

In 1.20, the Eye is shown in the discovery Ne du Valeos du Ellach, with the Dern Beast saying the Eye will see everything soon. More clues were revealed about the Eye with a slightly redone WynnExcavation Site D quest, showing how another species called the Olm went insane from paranoia of the Eye watching them.

The Eye is an enormous, stationary eye at the front of the arena that occasionally blinks. The Eye’s hitbox is located just in front of it, where its nametag also appears. The fight is scaled depending on the number of players in the arena at any given time. This means that the Eye will use its abilities more often the more players there are. Therefore, although it is recommended to challenge it with a party, a very large group of players may make the fight significantly more difficult. 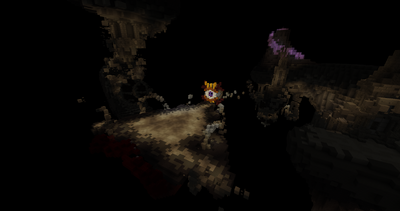 An overview of the boss arena (click to enlarge)

The Eye has a total of four phases of combat, with two additional minigame-like "intermediate" phases.

The Eye begins with a total of 3,500,000 health. It has defense against ✽ Water and ❋ Air damage, and deals ✽ Water, ✤ Earth and ✦ Thunder damage with its attacks, so equip yourself accordingly if necessary. Unlike most mobs, the Eye attacks solely with a large host of abilities, not normal melee or ranged attacks. These are always signalled by a ring of white particles appearing in its mouth before the ability is cast, as elsewhere in the game. They include Arrow Storm, Push, Meteor, and Wave, as well as their more powerful “heavy” variants.

Additionally, the Eye possesses several completely unique mechanics, becoming more intense with each phase. These abilities are not signified by the spellcasting particle ring, but often have their own signs to warn you that they are about to occur. Phase 1 introduces several of these mechanics, starting out relatively simple: 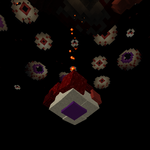 Between phases 1 and 2, the arena changes, and you will enter the first of two transitional "minigame" phases. During this phase, any remaining Gazers disappear and the Eye closes completely, ceasing attacking as well as becoming unattackable itself. Several eyes will begin falling from the sky, impacting the arena at random points and dealing damage to any players they hit. However, they are not too difficult to avoid, and if you are careful this phase can be used as an opportunity to regroup and recuperate. After around 30 seconds, the arena will change again and you will enter the second phase of combat.

The Eye’s second phase is largely similar to the first, although it introduces some new mechanics. It continues to use the Arrow Storm, Push, Wave, and Meteor abilities, in addition to the Explosions mechanic around the edges of the arena. The Retaliating Gazers are present the same as they are in phase 1, and the Wretches are also still present at the back of the arena. There are two new mechanics in phase 2:

The Eye's second phase has an effective total of 900,000 health, slightly more than the first phase; it ends when the Eye has been reduced to 1,900,000 health.

After finishing phase 2 you will enter the second and final minigame phase. Like the "falling eyes" segment, the Eye will close and become invulnerable; this time, five new eyes will open up where the Wretches are normally located. These eyes can all use the Laser attack introduced in phase 2, and like before each laser is signalled by a beam of green particles. The five eyes use their lasers in patterns, covering large parts of the arena at a time or sweeping across it in succession. You are given lots of warning before each attack, so as long as you make sure to avoid each wave of lasers this should not be challenging. After surviving the lasers for around 45 seconds, you will begin the third phase of combat.

In phase 3, the arena has been completely overtaken by red growth. This is by far the longest and most difficult phase of the fight; the Eye retains all of the abilities and mechanics it has used in the previous two phases (except the Cascading Arteries), which you must continue to be attentive to, particularly the Laser attack. This penultimate stage also introduces new mechanics that often prove extremely deadly, especially to inexperienced players or smaller groups. These are:

The third phase has an effective total of 1.5 million health, almost as much as the previous two phases combined. When the Eye is finally reduced to 400,000 health, you will enter the fourth and final phase of the battle. 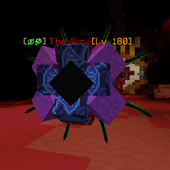 In its final phase, The Eye ejects itself from its shell, becoming a free-roaming mob more closely resembling a traditional boss fight. In this form the Eye loses its elemental defenses and attacks with melee, moving at a moderately fast speed. Most of the Eye’s previous mechanics are no longer present in this phase (including the Wretches and the Laser attack). Retaliating Gazers will continue to spawn, however.

Although its unique mechanics are no longer used, the Eye’s normal mob abilities continue to pose a significant threat, and should not be underestimated. These abilities include Meteor and Heavy Arrow Storm, high-damaging spells that should be avoided; as well as Push and Pull spells, and the more difficult to avoid Heavy Wave. The Eye’s new abilities include Slowness and both the normal and heavy variants of Teleport, making it both extremely mobile and capable of inflicting debuffs that can be deadly combined with the Gazers and the Eye itself. Nevertheless, this phase is relatively straightforward.

After depleting the Eye’s final 400,000 health, it will finally be defeated, and you will be teleported to the entrance of the dungeon with your rewards, including The Eye's Pupil, 3 Eldritch Outlook Fragments, and 70 Emeralds. For more information on further rewards, see Eldritch Outlook Dungeon Merchant.

The Eye has been present in every Wynncraft logo, in some form or another, since the server's inception. Often appearing within a pyramid or with other imagery associated with the occult in the real world, it has long been implied to be an omniscient being and the subject of a cult-like following. It was first directly referenced in-game with the release of the 1.13.1 Update and the finale of the WynnExcavation questline.

During the lead-up to the release of the 1.19 Update, the logo was quietly changed to show a grotesquely detailed depiction of the Eye, rather than the more symbolic rendering usually seen. Additionally, the Wynnic text on the logo was changed to read "IT IS COMING". This detailed depiction also appears in the final logo for the update, with several other eyes. Following the update's release, in addition to the climactic battle atop the Eldritch Outlook, a significant amount of lore about both the Eye and Dern itself was revealed through the new Quests and Secret Discoveries in the Silent Expanse.