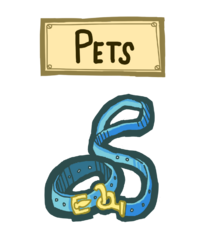 Pets are companions that can be obtained from Loot Crates or can be bought with money in the Wynncraft store. You can have up to two pets summoned at one time. VIP+ players and higher can have three pets summoned at a time. Donor rank players can also rename their pets and horses via the /renamepet command or through the pet selection window.

There are two types of pets: ones that are only bought through the store, and Wybels, which cannot be bought and are only found through Loot Crates.

While you have pets summoned, they follow you into battle, attacking enemies near you. As your pets participate in battle, they level up, gaining more damage and many other features.

All pets deal the same amount of damage, and having more pets summoned does not increase their total damage output. For non-Champions, the maximum level for pets is 20. Champion-ranked players have the ability to level up their pets to level 100, assign them tasks, like storing or selling items, and can pet their pets.

Note: This article is a stub. You can help the wiki by expanding it.

The following pets cannot be purchased from the store or obtained from Loot Crates.