This is a page for a general introduction to Wynncraft and its mechanics. You can find out more about them on their respective pages.

Wynncraft is a magical fantasy land created by CraftedMovie. It is filled with many wonders and things to discover. As you journey you will find everything from harmless animals to dangerous and very powerful foes. Please read the Rules before playing on the server and follow them. The game world is operated and moderated by the Wynncraft Staff.

You, as the player, are a soldier sent to Wynn to help fight the corruption. You start the game near the border of the Wynn province. In the first quest, King's Recruit, you have to reach the Ragni Castle. After finishing the tutorial you are free to explore the world however you desire.

This guide entails many of the basic mechanics of Wynncraft. For more info on each one, see their individual pages. 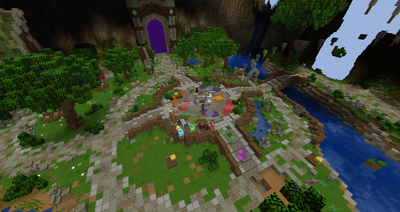 You can join the server from multiple IPs:

When you join a world, the official resource pack will automatically start downloading. It is possible to play without it, but it is not recommended. If you have trouble downloading the resource pack, follow the steps on this thread.

After this, you will see the class selection screen. Click the green plus button. The icons in the upper row are the regular, non-donor classes. From left to right, these are Archer, Warrior, Mage, Assassin, and Shaman. Choose one and you will be sent right into the game. If you already have started a class, click on its icon and play. You can skip this step using the command /toggle autojoin so the game will automatically choose the class you last selected. To undo this, enter the command again.

Gear with the XP Bonus identification can increase the amount of XP you receive, but Quest XP is not affected by any bonuses. 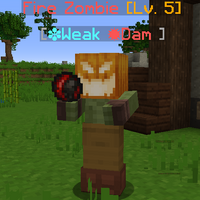 This mob has a weakness to water and deals fire damage, meaning water damage will be more effective on it, while if you have little fire defense, you will take more damage.

Skill Points are earned when you level up. Your player will acquire 2 points per level.

NOTE: Most armour, weapons, and accessories require skill points assigned to one or more elements in order to be used.

Skill Points can be spent on these perks:

Mobs can also have elemental stats:

Quests are tasks that you can do in order to get XP and Emeralds. The contents of a quest may vary from simply collecting materials to traveling through time or finding ruins of ancient civilizations. Quests range in difficulty and duration, with the greater challenges giving a greater reward. Some, but not many quests may require teamwork to complete the quest, and some require you to think outside the box. Some quests also give access to different areas, dungeons, fast travel points, or merchants. Additionally to the monetary and experience reward, you may also get powerful gear.

NOTE: It is recommended to complete most (if not all) quests you come across on your first playthrough to fully experience the game.

Wynncraft has an official resource pack, which is required to be able to view the different weapon models. The game has over 4500 different items, allowing for a broad spectrum of playstyles.

Wynncraft has many different types of items:

In the world of Wynncraft, blocks are unable to be broken. An exception is flowerpots, which have a chance to drop emeralds (and a low chance to drop items). The majority of the blocks you see will be decorative. Items can be obtained in the following ways:

Most of the weapons, armor, accessories, and crafted items have identifications (stats, IDs) that give buffs and/or debuffs. Here are some of the many possible IDs:

Stats on items are mostly beneficial but can also come at the cost of one or several other stats. For instance, the Mythic Warp gives a lot of walk speed allowing for fast movement, but it has the tradeoff of massively negative health regen.

Wynncraft's primary currency is Emeralds, a green gem that you will encounter many a time as you adventure through the world.

You can trade your items with other players. To ask for a trade, either use the command /trade [playername] or shift+right-click on the player one wishes to trade with. Be careful not to get scammed. To accept a trade, both of the players need to click the checkmark twice.

Merchants are NPCs marked with a magenta name that after right-click opens a GUI for trading. Most merchants trade for emeralds, although some use a different currency. In Rymek, for instance, merchants will only accept Gold Bars as currency. They can be found in almost every city or town. You can buy almost anything from basic gear and Accessories to scrolls, potions or even potatoes.

You can use the in-game trade market, located in most major cities, in order to easily get items without having to search for them or look on the Forums or Discord server. Note: It is recommended to check the regular price of an item (especially higher-level and rarer items) before deciding to buy it.

You will find many loot chests in the world of Wynncraft, which are distinguished from un-openable decorative chests by their particles. These chests contain gear that may help you along your journey. Take note of where you found them, as they will respawn with new loot inside after a certain amount of time. If a loot chest goes unopened for a long time, the loot in it will increase in value and amount. A recently opened loot chest will only have a pitiful amount of emeralds inside.

Individual Dungeons are unlocked by completing their dungeon quests. To enter a dungeon, you will need a Dungeon Key dropped by their respective Key Guardian.

Dungeons often contain a mixture of combat and parkour. The player must make their way through several stages before being able to defeat the dungeon boss. Dungeons are often more challenging than the usual cave or quest, so the player should come well-prepared. Dungeon rewards include one boss drop and three dungeon fragments. Both are used to buy items from Dungeon Merchants. They also give the player a significant amount of EXP and some Emeralds upon completion.

Most dungeons also have higher-level corrupted variants, which can be found in The Forgery.

Upon death, you will lose two Soul Points and a few items. The lower the number of Soul Points you have, the higher the chance to drop more valuable items.

If you are low on Soul Points, it is highly recommended to be very careful and wait for more Soul Points.

The soul point regen ID gives you a chance to get two soul points instead of one at the in-game sunrise.

Three especially useful and most used commands are:

This information isn't strictly necessary to play the game, but it's good to know nonetheless.

The game contains a lot of lore found in Quests, Discoveries, and other sources. By playing through the game, you can find out more about Wynncraft.

Click here to read the current timeline of Wynncraft. The full storyline was written by Grian (admin and head builder for Wynncraft) and is expanded upon each update. The Lore category contains a list of articles pertaining to the lore of the game.

The world of Wynncraft is separated into four main provinces:

There is also the Realm of Light and the Dark realm Dern.

You can find the official F.A.Q here.

The Wynncraft webpage has a semi-3D map of the overworld. Make sure to use it as some quests may be difficult without this. At the top right, you can choose which markers to show. There is a wide variety of markers, including merchants, the Portal, dungeons, etc. The map itself is accessible by going to the main website and scrolling down to the "Help" section, and then press the "Map" button. Or you can simply follow this link. There is also an unofficial 2D map on Wynndata.

Horses are a quick and versatile mode of transportation. You can get one for free at level 34 after completing the quest Stable Story, but subsequent horses must be bought for 24EB per brown horse. Their skills are capped at a certain amount, but the higher your horse's level, the stronger and faster it is. There are 4 tiers of horses: Brown, Black, Chestnut, and White. Horses can be bred by combining two horses in your crafting window, which will result in either a better tier, the same tier, or a worse tier. White is the highest tier and capable of the highest speeds and jump heights.

Guilds are player-made groups that can be registered at the Guild Hall, each with their own name, banner, and hierarchy. A guild's goal might be to take over as many Territories as possible, or to simply help any newcomers with the game, it's up to them! Guilds can claim territories to gain resources and guild XP. Claimed territories can be attacked and defended by guilds in Guild Wars.

They do not have any gameplay benefits.

Crafting is a way of creating your own items. It is not necessary in Wynncraft, since nearly all of the items you get and use are from other sources listed above. To craft, you will need several resources. There are four gathering professions: Woodcutting, Mining, Fishing and Farming, each with producing their own unique Crafting Materials. Combining the materials in different ways at different Crafting Stations gives you different items. The eight crafting professions are Weaponsmithing, Woodworking, Armouring, Tailoring, Jeweling, Alchemism, Scribing and Cooking.

Builds involve choices of armor, accessories, and a weapon that usually fit a certain theme. While any combination of equipment is technically a build, most endgame builds focus on either 3 or 5 elements, revolving one of the four primary playstyles.

The four most common playstyles of builds:

These abbreviations are commonly used ones:

If there is "C" before the abbreviation, it means that it's the corrupted variant.