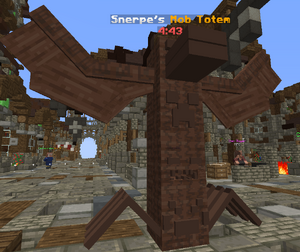 The Mob Totem is an item added in the Wynncraft Store Update along with the new Bombs, Hero Rank and Crates. Unlike the other store items this item cannot be purchased but rather comes as a daily reward for the Ranks.

When used, the totem is placed down where you're standing and increases the mob spawn rate around it in a radius for 5 minutes. This also encourages group farming.

Remember: The total time is just the amount of time in which you can use your own totems. You can still benefit from other people's as well.