Note: This article is a stub. You can help the wiki by expanding it.

An example of a fabled tier weapon mastery tome.

Mastery Tomes are raid reward items that give basic buffs to the player, such as XP bonus, damage modifiers, and defense, with the exception of Guild Tomes. There are 2 levels of tomes available as well as Legendary, Fabled, or Mythic tiers. Most armour and weapon tomes contain prefixes that determine its stat identifications, however, the base buff is the same across all tomes of that type. Tomes are Soulbound, meaning they cannot be used on any class except the original owner of the Tome.

To use the Tome Menu, you first must complete the first part of the Realm of Light questline, Realm of Light I - The Worm Holes. This will unlock a menu for the Tomes. There are currently 12 usable slots in the menu. Each slot is unlocked through various achievements, as well as having a Combat requirement.

Mastery Tomes are Tomes obtained from Raids. They are raid specific rewards obtained from the raid reward chest at the end of each raid, though not all types are obtainable from each raid. The Canyon Colossus raid gives level 2 slaying, gathering, and armor mastery tomes, while the Nest of the Grootslangs raid gives level 1 tomes of varying kind (armour, weapon, slaying, gathering, dungeoneering). Orphion's Nexus of Light raid give level 2 weapon, armor, dungeoneering tomes. as well as level 1 gathering tomes.

Guild Tomes are different in that they are acquired from holding territories with the Tome Seeking upgrade active.

They give a boost in a primary stat, such as +x% more XP from Slaying Mobs, and some of them can also have other modifications that can be reflected onto the name. For example, a Sorcerer's Tome of Armor Mastery II will have +4% Mob Damage Resistance as well as some Spell Damage as a secondary Identification.

There are 5 different types of Mastery Tomes, Armor, Weapon, Slaying, Gathering, and Dungeoneering.

Armor Tomes give resistance to damage from Mobs.

Weapon Mastery Tomes give a damage boost against Mobs.

Slaying Mastery Tomes give a boost in XP from killing Mobs.

Dungeoneering Mastery Tomes give a boost in XP from Dungeons.

Gathering Mastery Tomes give a boost in XP from Professions.

If a Mastery Tome is Fabled or above, then it will have a modifier prefix, indicating that it will get Identification buffs similar to what a build for that would look like. However, if it is a Legendary Tome, then it will not have a modifier prefix, and just give a generic boost to an identification similar to the primary stat of the Tome. (Ex: +x Health for a Legendary Armor Mastery Tome).

Below is a table of prefixes and what they do for some of the Mastery Tomes. (Help in finishing table would be appreciated) 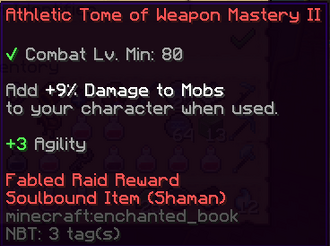 Also called Tomes of Allegiance, Guild Tomes are received from the Tome Seeking upgrade for some towers. They are Untradable instead of Soulbound, unlike Mastery Tomes, and can be sent to members of the Guild that has them. Guild Tomes give a minor skill point boost to 2 Skills. Each Mastery Tome has a name for different skill point combinations. Below is a table for the names of the Guild Tomes.