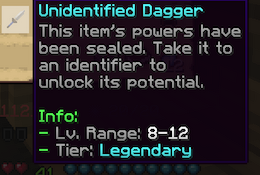 Identifications are ways to increase the effectiveness of weapons and armor. Only Unique, Rare, Legendary, Fabled, Mythic, and Set Items can be Identified. Items may have up to 27 identification bonuses. There are a few exceptions to this, such as Bob's Mythic Weapons or the Infused Hive Weapons, where each weapon will have set bonuses when bought. When items are first found they are usually unidentified, as shown in the picture. However, the item can become identified in exchange for emeralds when it is taken to an Identifier. Doing so will reveal the item's name, requirements, identification bonuses, and slots.

The possible identification bonuses are listed below.

A full list of each available identification in game separated by categories. For further explanation on identifications marked with a *, see below.

Loot quality increases the chance of getting rarer items from mob drops and loot chests, and reduces the chance of getting more common (Normal- or Unique-tier) items. It does not affect other loot, like Potions, Emeralds and Powders. Similar to loot bonus, loot quality has diminishing returns on chests with an effective softcap, however, the effects begin sooner (as explained by xSuper_Jx):

This, in effect, makes any percentage value above 40% loot quality worse than the same value of loot bonus, at every percentage.

Both thorns and reflection deal damage back to enemies that hit you (thorns for melee attacks, reflection for projectiles and spells). If activated, a mob's attack is reflected back at them for 150% damage, while an enemy player only takes 50% damage. The percent value of the ID only represents the chance that it is activated upon any given hit.

The chance of getting mana/health depends on your attack speed.

Spell cost and raw spell cost are groups of four "sub-identifications" each (one for each spell, encoded as 1st, 2nd, 3rd and 4th). These are displayed based on the class being played, which might cause some confusion in the cases of weapons; a Spear that reduces the cost of the Bash spell by 1, if viewed by a Mage, will instead show that it reduces the cost of the Mage's Heal (despite the fact that Mages cannot use Spears) because Bash and Heal are both the 1st spell for their respective classes.

The mana cost to cast a spell is calculated in the following steps:

The absolute minimum final cost to cast any spell is 1 mana (except in the cases of certain Major IDs; see below).

Also, note that when casting the same spell several times in quick succession, the cost will increase each time, and even with extreme spell cost bonuses (such as when teleporting with Warp) the increasing mana cost will eventually become unsustainable.

Major IDs are a new type of unique Identifications introduced in the 1.19 Silent Expanse Update. Major IDs are only present on specific items, are not randomly rolled, and provide a wide range of effects that cannot be acquired elsewhere. Because of this, some of these IDs are only available with certain Classes or builds. The effects of these IDs do not stack when using multiple items with the same Major ID.

Note that the maximum and minimum values shown above are estimated values. The maximum values are also for all current known armour and weapon items, and may change with any new releases.