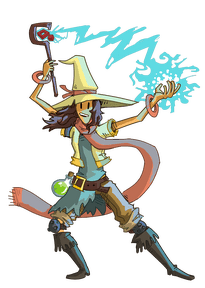 The Mage Guide provides useful information and tips for playing the Mage class. The basics section covers topics for players that just started the Mage class and want to know about its spells and how to use them, as well as some basic tactics. The advanced section covers more in depth topics that should not be attempted by beginners until they have mastered the basics. Most of those topics will center around solo play rather than team play.

The Mage class is a class with high sustain, good AoE damage, and decent range. It can quickly recover from sticky situations, and is able to chain spells very well as it can stop enemies from moving.

Unlocked at level 1, and upgraded at levels 16 and 36. Cast: Right-Left-Right

This spell heals the player's health. It is very useful for making sure you don't die in combat. Heal can be useful in bosses such as The Eye, where missing a wretch can take away 90% of your health. It can also be used in team play, as it heals players around you as well. The amount of health the spell heals can be boosted by stacking high health armors or by having a lot of +water damage.​

A transportation spell, this spell blinks the user forward 20 blocks in the direction you are looking at. It allows you to bypass traps and parkour, take shortcuts, cover long distances quickly, or get away from a dangerous situation. At later levels it deals damage and blinds enemies as well.​

Unlocked at level 21, and upgraded at levels 36 and 56. Cast: Right-Left-Left

The Mage's main damage spell, it deals 500% damage per cast. It has a large cast range and a large area of effect as well, enabling the mage to deal massive damage to a crowd of enemies. This is the only purely offensive spell in the mage's arsenal. It also auto-targets roughly to the nearest monster to where your cursor is, and is able to go through walls in certain situations.​ Its upgrades increase the rate of falling (so you can cast more often) and add a massive field of flames to deal extra damage.

Unlocked at level 31, and upgraded at levels 46 and 66. Cast: Right-Right-Left

Ice Snake slows and deals damage to enemies- good for setting monsters/players up for other attacks like meteor. It has a ridiculously long range of about 30 blocks, and also goes through walls, allowing for a wide range of uses. At later levels it completely freezes the enemy for a little bit as well.

These are tactics that apply to all classes and playstyles.

Before going into a boss fight, it is extremely useful to get to know what spells the boss may cast. Some bosses cast spells such as multihit that can easily mess up a run. A good way to avoid getting into one is to know what spells the mob you're fighting casts, and the order it casts in. Bosses such as The Eye are very predictable, so knowing when it casts spells can be the difference between life and death. This can also be useful in knowing when to retreat and use a heal pot, as using a pot while a boss may be preparing to cast a spell can lead to death.

Use your arena[edit | edit source]

A good strategy for fighting some bosses is to look around the arena for areas you can take advantage of. Things such as the pressure plates in Cybel and Orange Wybel can be bad for spellspam/glassy builds, but for builds that rely on mana steal and life steal, they can be lifesaving. In Hunted mode knowing where you are is important, as if you are not near a city you can easily get ambushed by a player, and if you get cornered it will usually lead to death. You can also cheese parts of bosses by using your arena, such as the arcs in The Eye to cheese the first bullet hell stage.

For more spell/hybrid builds, being able to chain spells is important. Chaining spells is when you use two spells in quick succession. Usually, this is used to reset mana costs, and to deal more damage to your opponent. You can also chain spells for movement, where you cast your movement spell, then a 'buffer' spell to reset costs. With enough mana sustain, being able to chain spells can cause devastating damage, and once you get good enough, you can chain spells almost forever. Note that for melee builds spells aren't really needed too much, though there are outliers such as Assassin's vanish, as vanish will always cost 1 mana at high levels, no matter your intel or spell cost identifications.

The concept is simple, and using it is simple. However, it requires a lot of concentration and attention at first, but practicing enough can lead to amazing spell combos cast so fast it seems like one gigantic super spell. The way to do this is to start off casting slowly, and then gradually ramping up the speed. Make sure to practice each spell's click combo individually as well. Spell chaining is extremely rewarding in The Nether if done right, sometimes resulting in an instant kill. But if there is ONE wrong click, the whole pattern goes off track and you end up with no mana, and an enemy still killing you. An example is right-left-left-right-right-left-right-right-right-right-left-left. (Meteor, ice snake, teleport, meteor). One extra right click could turn this into meteor, and then a whole gigantic mess of random clicks. Mastering spell chaining can make anybody nearly unkillable and dominate the nether.

A nice part of the Mage's kit is that a lot of spells have very high knockback, if aimed right. Correct usage of knockback means pushing players into lava in the nether, having bosses never touch you (even Corrupter of Worlds) and a lot of fun times trolling people. The spells that have large knockback are:

The biggest thing to remember about knockback is that all these spells do not knock back too much on ground, but when in mid air they launch the enemy huge distances at huge speeds. An example of knockback being useful is when ice snaking someone off a hill, then basic attack them while they are in mid air. This gives 2x the knockback and pushes them back very far, but even better - the enemy cannot move after landing due to ice snake's freezing. This then enables you to rain meteors and hell upon them from a safe distances while they struggle to get back to you, but the burn effect and explosions of meteor stopping them.

Things to remember are that ice snake does not have knockback against players on the ground as it freezes them in place, and that the basic attack can keep a walking/running player at bay indefinitely.

Mage has a spell that always goes through walls already - ice snake. However, other attacks can go through walls as well. The basic attack can hit through fences, and meteor can auto-lock on enemies under a 1 block thin floor. Meteor will also target enemies behind a wall if they are close enough to it. A good example of using this is casting ice snake, then turning around to have it curve back and push your enemy against the wall. Then, cast meteor and kill them.

The last part to the advanced part of this guide, is going to be a list of all the spell combos, and what they do. Reason this is in advanced is because a few of these require spell chaining to be used very effectively.

This one uses the fact there is a slight delay between casting meteor and it hitting the ground, as well as the time it takes for the ice snake to reach the target. Teleport is instantaneous, so if all 3 spells are cast with the right timing they will strike the enemy all at the same time, causing insane burst damage. Meteor will finish them off, unless it is a warrior, in where you basic attack while backing away.

This combo knocks back and freezes in place enemies allowing for safe casting of meteor.

This combo can be abused for trolling. However, it is effective against Warriors that like to spam charge if some basic attacks are laced in as well - it will knock them back every time they try to charge, or you will dodge their charge while constantly damaging them.

For use against those poor Assassins.

This escape combo blinds and slows enemies and gives you a ton more health. Useful for withdrawing to recover a bit and give yourself an edge over the enemy.

A triple meteor will either instantly kill anybody, or bring them down low enough that teleporting onto them and using a few basic attacks will finish them off.

(repeat however many times it takes to get to a decent amount of health) This lets you keep your enemy at bay while slowly healing up and resisting up to two people at once. Landing the basic attacks are crucial to this however, and if done right you'll end up with a full mana bar and a full health bar while the enemy has been slowly whittled down.

This allows you to quickly escape from deadly situations while healing your self. Using basic attacks in between is essential due to the fact that you can easily damage enemies while getting away.

This is for all those spamming Archers.

Use the ice snakes to strike from different directions (mind control at level 66) and confuse the enemy. Add in one or two basic attacks in between the ice snakes to get back mana (have mana steal on your wand to do this). The meteor should kill or lower the opponent to an extremely low amount of health. Extremely mana thirsty combo recommended for high levels. Useful against bosses and PvP (don't try against swarms, it won't work as well).

Rrlrllrrlrll over and over again is a strong way to keep a boss, mob, or player immobilized while dishing out massive amounts of damage. The constant cycling of meteor and ice snake should keep the mana cost low. This combo can (slowly but) reliably break down heavily-defended mobs like those in Legendary Island. Be warned, it is very mana hungry and best done with high mana regen and over 68 intelligence.