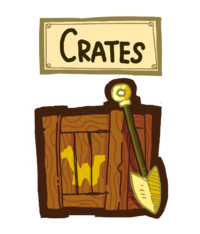 Loot Crates are an in-game cosmetic package that can be purchased directly from the Wynncraft Store (you can claim one crate each month for free) or received daily as a perk after purchasing V.I.P.+ or HERO rank.

When you open crates, many different rewards are available.

Common - This is the lowest tier of item you can get. They are usually basic player effects, attack effects, disguises, and wybels.

Rare - This is the second lowest tier of item you can get. These rewards can be "food" gear skins, more diverse player and attack effects, and disguises.

Epic - This tier is the third highest tier. These rewards include intricate gear skins, many of which are used in favor of the rare tier skins.

Black Market - This tier is the highest tier of item you can get, obtained by scrapping Godly rewards or by being lucky in a T3 loot crate. Rewards include hats, wybels, weapon skins, and particles. 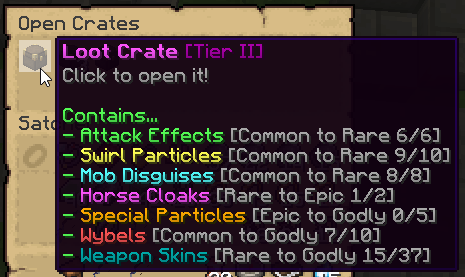 Currently, there are 3 tiers of Loot Crate available.

All of the above tiers can also be obtained as monthly crates.

If you have 5 items of the same rarity, you can open the Scrapping Menu and exchange them for 1 item of a higher tier. The item received is randomly chosen. Black Market rewards cannot be scrapped.

When you open a crate, make sure that there is enough room around you. Once opened, it will summon a physical loot box in front of you. Opening it will give you a chance to get one of 10 items (think Wheel of Fortune). Activating the crate again will stop the spinning over a few seconds (spinning time varies). Tier 1 crates contain mostly Commons, and chances of getting Rares and above increases with Tier. It is, however, still possible to receive up to Godly rewards from Tier 1 crates.

These can range from Common to Black Market.

These can range from Rare to Epic.

These can range from Common to Black Market.

To redeem a Wybel from a token, simply type /pets and click on the token of your choice. Wybel tokens can be redeemed multiple times in order to allow summoning multiple at once.

These can range from Rare to Black Market.

Hats were a cosmetic feature added in the 1.17 update. They are Black Market exclusives.