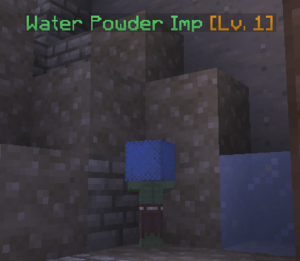 Imps are special mobs that roam the provinces, all of which have some significance other than being a threat towards the player. A mob is classified as an imp based on its drops, appearance and name. Imps will only drop a maximum of one type of item, but can drop multiples of that item. Imps must also be the small "Baby Zombie" model and usually have the word "imp" in their name.
There are currently seven imps in the game.

There are two types of behaviours demonstrated by Imps, these are aggressive and fleeing. As the names suggest the aggressive imps will attack the player via ranged attacks (usually throwing the item they drop) and the fleeing imps will run away from the player usually with great speed.