Attention: This page is still under construction and is incomplete. 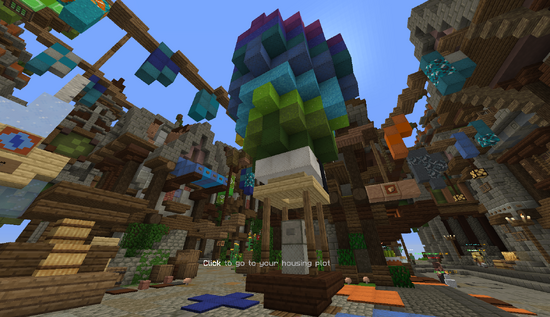 A hot-air balloon used to access a player's house. This one sits near the center of Detlas.

Housing is a feature introduced in Version 1.20 which allows players to create, customize, and decorate an individual plot of land. Crafting Materials can be traded with the Block Merchant for a wide assortment of themed blocks, and Emeralds can be traded for place-able NPCs such as a Blacksmith or Crafting Station.

A player's housing plot can be accessed by a hot-air balloon found in any of the major cities, pictured to the right. Clicking on the basket gives the player three choices: 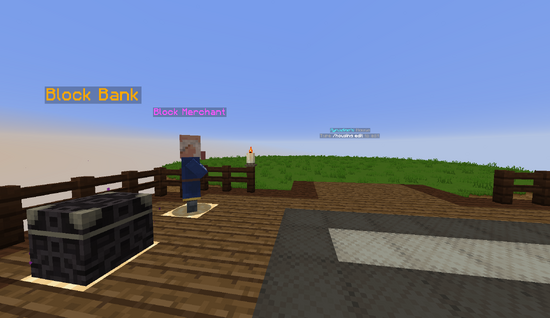 The player is given a 81 x 81 block circular island with a default allowable build size of 51 blocks x 51 blocks x 6 blocks deep (the player can build up to 255) whilst being expandable to the full size of the island using the HERO rank.

The Block Bank, similar to the banks found in most towns, can store blocks bought from the block merchant, as well as some "starter" blocks that are automatically added to the block bank once the player creates a house. These starter blocks include:

The Block Merchant is an NPC who sells you blocks for building on your Housing Island. He is located by the Block Bank. The merchant sells a large variety of blocks in exchange for materials gained from doing professions. As more blocks of the same type are purchased by the player, the amount of resources required to buy that block begins to increase. The Block Merchant also sells various NPCs such as the Trade Market and Item Identifier.