Outdated Content
The following page contains information about content that is outdated and has not been updated yet. You can help Wynncraft Wiki by updating it.
Some things may be updated, but others are still out of date

Guilds are community's of people that work together to achieve their goals. You can level up your guild by giving it some of the XP that you earn by using the /guild xp [int] command or by taking territories and leveling up the "XP Seeking" bonus. Your guild can start with 5 members, and will increase as you level it up (see the perks table below). Each territory you own will allow you to use bonuses to get things like guild xp, guild emeralds, guild resources (more on this later) as well as bonuses to allow you to generate emeralds & tomes you can give to players. 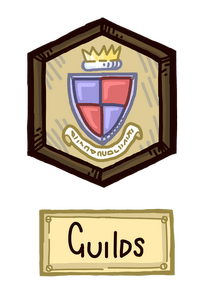 Guilds can be created once you are level 75, by going to the Guild Master in the Guild Hall in Cinfras and paying 20 Liquid Emeralds and 3 Soul Points. Guild tags can be 3 or 4 letters long and cannot be an existing guild name. Guild names cannot be existing guild tags.

To defend a territory claimed by your guild, you use /gu manage, select the territory menu, then select whichever territory you want to defend. Clicking the first button, you'll be able to modify 4 different stats; defense, health,

When you attack a territory using the /guild attack command (or by clicking on the banner that marks each territory), you and all of your participating guild members (they can be on different servers, but must be in the same region) will be teleported into an area with a large Guild Tower in the center, which is a boss that must be defeated in order to gain control of the territory. The Guild Tower can attack in many ways, and has a varying amount of health and damage, which is set by the members of the Guild Tower's guild through Bonuses. If you win, you will gain control of the territory, but if you lose, you will be teleported back to your server as you die and lose 2 soul points. Note that it costs a certain amount of emeralds in order to start a war, which can either be provided by the player attacking the territory or from the guild's storage of emeralds.

The table shows the amount of Guild XP required to advance to the next level. For example, it takes 20,000 XP to get from Level 1 to Level 2.

If your guild happends to be at an "unknown" level, do /gu stats ingame and add it here to improve the wiki! [Original post]

Upgrades are buffs that can be set on the guild tower of a territory at the expense of resources. They provide raw stat bonuses to damage, attack speed, health and defence. The guild tower also recieves a stat boost based on the amount of nearby owned territories, with a +30% bonus to damage and health for connected territory that is owned.

Bonuses are buffs that can be set on Territories at the expense of resources and emeralds. They provide ability stat boosts for the guild tower, gathering and combat XP boosts for the owning guild's members, and can boost resource and emerald generation.

Below are the costs for each Bonus.

The following commands can be shortened by typing /gu <cmd>

You can join a guild with

*Contrary to what some believe, this does not take levels off your character. Every time you kill a mob, the percentage of exp specified in the command will go towards leveling up your guild. Most players will turn this setting to 100 on at lv 105 or 106.

Guild banners are customizable in the guild menu when clicking the banner of an area, and are used to showcase a guild by means of a banner whenever they control a territory. Each banner is exclusive (and thus no two guilds can have the same banner) and can be changed at an area banner for 10,000 emeralds.

Pedestals for guild banners are upgrade-able when clicking on an area banner, and are displayed whenever the guild controls the territory as the area banner. Pedestals work in a system of tiers, with each upgrade incrementing the pedestal's tier by one. Each upgrade also has a required level for the guild, and if not fulfilled the guild is unable to upgrade their pedestal. 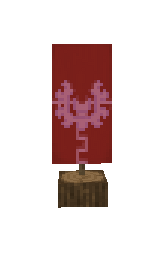 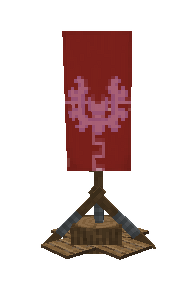 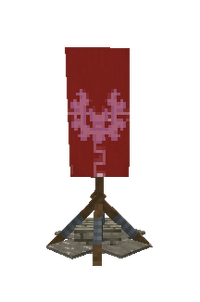 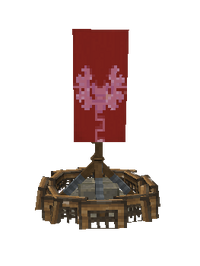 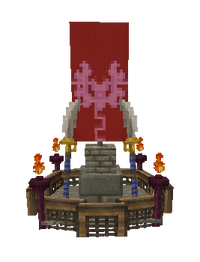 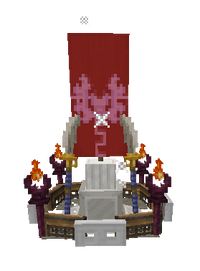 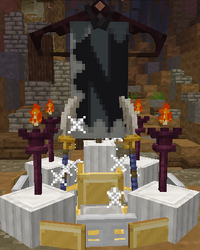 Formula for the minimum guild level:

Formula for the emeralds needed for tier 2 and higher: