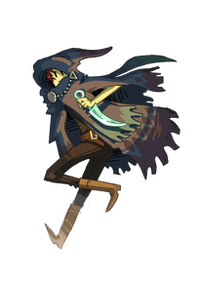 The Assassin Guide provides in-depth information on play style and tactics for the Assassin. It is split into two sections, Basics and Advanced. The Basics will contain simple things that the player can figure out after a little bit of playing, such as the breakdown of abilities. The Advanced part will contain tricks or strategies that are harder to uncover and may require a lot of testing and playtime in order to figure out.

First off, what is the Assassin class and what does it do? Just as the name implies, the assassin is a stealthy, hard hitting class, but there are a few downfalls.

Unlocked at level 1, and upgraded at levels 16 and 36. Cast: Right-Left-Right

This is a 360° attack that does 150% to all enemies around you. It's great for dishing out damage to a large crowd from a safe distance, but has no knockback. At later levels, it becomes a good spell that can debuff enemies, setting them up for an attack or allowing for an easy escape.​

One of the spells that makes the Assassin an assassin in Wynncraft, it turns you completely invisible to the enemy eye except for a small smoke particle. The duration of invisibility is five seconds. It also becomes a very powerful attack buff and speed buff later on. This is a very useful spell and can save you from many deadly situations, and is also good for attacking. However, there are very important things to remember regarding Vanish:

Unlocked at level 21, and upgraded at levels 36 and 56. Cast: Right-Left-Left

Multihit is what makes the Assassin able to actually assassinate. It deals 10 hits of 30% damage each, or 300% damage. At later levels, it deals even more damage (350%) and after level 56 lets you control where the enemy goes. This spell can be counterproductive before it, as where the enemy will go is completely random, and sometimes it WILL send an enemy flying into your face and potentially killing you. It is also extremely costly to use and has a very short range of 3 blocks.

The last hit of multihit does neutral, Water, and Thunder damage, while all the other hits only deal pure damage.

Unlocked at level 31, and upgraded at levels 46 and 66. Cast: Right-Right-Left

The assassin's only ranged attack, it throws an egg that deals 60% damage repeatedly to any enemy caught in it. If an enemy stays in it, it becomes even more powerful than multihit. Because of this, smoke bomb becomes a very good farming tool, but does not perform as well against mobile targets. At later levels, it slows enemies greatly and more eggs are thrown at once.​

These qualities make assassin a very situational class - if it can sneak up on an enemy in The Nether or in PvE, then the enemy is almost guaranteed to be dead. Although many people in the Nether consider assassin to require no skill, the assassin is actually very easy to counter - all classes possess a cheap, large area attack, which is good for finding a vanished assassin. Someone very skilled with the assassin can access high level places at low levels. However, one mistake can easily lead to death.

Any spell on Assassin should not be spammed, especially multihit. It is key to have enough mana to be able to cast Vanish. As all of Assassin's attack spells require large amounts of mana, it is important to land them on the first try and not have to use it more than once (for spin attack, twice). Not only does it consume large amounts of mana, it makes the spell counter go up, causing the next spell to cost 1 more mana than it usually does.

Multihit can be comboed into other spells, such as smoke bomb or spin attack. The majority of players nowadays throw down a smoke bomb, and then multihit players into the smoke to add stacks of damage.

Any class being played should be practiced on, but with assassin it's especially important- knowing how to throw a smoke bomb so it'll land where you want, learning the range of multihit and how it strikes as you move, and being able to eye a max range multihit are all advanced skills that can only be truly learned from practice. Because missing isn't an option regarding assassin, learning to land abilities all the time is extremely important.

Gravity affects the way you throw your smoke bomb. When you aim, make sure to aim above your target, so the smoke bomb can fall on its target. Learning the trajectory and eyeing distances is key. Take into account movement of the enemy and where they will be when the egg reaches it's destination.

At later levels, Vanish will give attack buffs and speed buffs that disappear after unvanishing. This allows for a super powered Spin Attack or Multihit, which can often result in easily killing high level monsters or enemy players.

There aren't really that many "tricks" with the assassin's ability - most of how successful you are with the assassin depends on pure skill. Usually, it's best to just to know when your opponent will attack so you will be able to dodge and create a counterattack.

Being aware of your surroundings is critical to performing well as an assassin. Knowing where high ground is, hiding spots to retreat to, potential choke points, camping spots, where enemies can approach, everywhere. Most of this applies to PvP.

At the third upgrade of Multihit, you gain an ability called Force. This allows you to control the direction of where Multihit sends your enemy. This can be used in many ways, such as directing them into a wall or throwing them into lava. However, one method stands out in particular. The second upgrade of Multihit adds a final hit at the end of the Multihit sequence that deals bonus damage but also knocks back the enemy further. This can be used along with force to suddenly switch their direction. Flicking your view to the side very quickly at the end of Multihit's sequence can result in the enemy casting a spell in an unexpected direction (if they even survive). It is also possible to survive enemy Assassins' multihits through Vanish. Vanish gives a decent resistance buff once upgraded and casting this early enough when Multihitted can result in losing only 4 or 5 hearts.