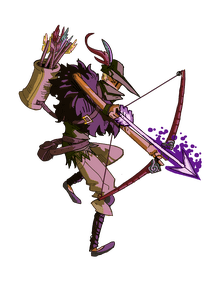 The Archer is known for its high damage outputs and low defense. It is a glass cannon, meaning that it deals huge amounts of damage but has poor defenses. This guide will overlook Archer abilities, if you want more in depth go here. It'll also cover basic spells, usage, and tactics in store.

First off, what is the Archer class? As I mentioned before, if you want more in depth of spells go here.
Pros:

Once activated, you 'jump' back really high into the air. It provides great means to escape, and to scale mountains and steep slopes. At upgrade 1, though, it doesn't give you speed, and it isn't quite as good as the other upgrades.
Upgrade 2 now gives Speed III for 3 minutes to yourself and anyone nearby when cast (equivalent to 60% walk speed boost).
Upgrade 3 gives 50% air damage when shift-falling, dealing 100% AoE damage upon landing.

Once activated, you are immediately surrounded by, quite simply, a circle of arrows that protect you from being attacked meleewise.
40% of the damage dealt is water.
Upgrade 2 get three charges displayed by three arrow moving around you
Upgrade 3 now rains arrows from the sky when the shield is activated by a mob.

A spell you want to prioritize is arrow storm. Any other spell works just fine, but arrow storm is much better than bomb, most cases. A lot of boss fights may require you to use arrow storm in order for enough damage to be dealt. The arrow storm ability may seem like it doesn't do damage, but what the ability lacks in damage (per arrow), it makes up in quantity. Sure, bomb has a lot more damage, but it is mana costly, and therefore a lack of damage output. Bomb is good for certain builds and certain circumstances, like when there is a mass of mobs, use bomb. It is an AOE spell, and it is also the only spell that an Archer has that slows enemies(excluding Escape). Builds that do prioritize Bomb are mainly water builds, unless your playstyle fits that of a slow, damage dealing archer.

Use arrow shield only when there are too many mobs surrounding you and you're stuck in a corner. Arrow shield will instantly knock back all the enemies that are 'connected' to the original damage takers, therefore allowing you to escape. Of course, using escape is also nice, but only if there is space. Shifting down(this only works if you have upgrade 3) while in the air will blind all enemies caught in your circle, allowing you to escape. Blinding the enemies will immobilize them and they won't be able to attack you.

By all means, use a horse! But if you're not up to it, then use Escape! Places that aren't fit for a horse, use Escape!

Escape, when used correctly, can propel you faster than a White Horse can travel, but only for a short amount of distance. Escape isn't mana costly at all. It can also save your life in boss battles. Just jump, click Left three times, look the opposite direction you want to travel, and it'll propel you across many distances. Escape can be used to cross chasms, ravines, etc. Escape can also be used to scale high slopes, reaching safe places and for exploration. Use escape regularly for free speed.

Escape can be used while jumping, but generally must activate while moving upward - otherwise, it will cast and deplete mana but will not actually propel you.

Also, Escape can be used on the surface of water to help you practically skip across the ocean. Using escape for travel works well with high Mana Regen, as you can go longer without having to wait for the spell cost to reset.

This will cover all of the tactics used by archers, and hints and tips.

Note: These tips are only for exploration, grinding, quests, PvE, etc. It is not intended for PvP!

Watch out, your mana is precious. Unless you have the agility archer build, you'll most likely take many hit, which can be fatal for you.

Note: These are builds created by the community. If you want more detail on builds then go here.

P.S. You don't have to follow these builds. Make up your own build if you want.